Kier were delighted to attend the official opening at Marlborough Street (6 GMS) on behalf of Manchester Metropolitan University. The new facility provides a smart, attractive environment specifically designed to house a number of professional services teams from across Manchester Metropolitan to encourage collaborative, partnership working to support the wider student experience.

The former Victorian warehouse, located within the historic Little Ireland area of central Manchester, forms the initial pilot scheme and catalyst to a major campus masterplan by the university and has been heralded as an exemplar of how to revitalise non-designated heritage assets by Manchester City Council.

6 GMS lies amongst an important cluster of historic textile mills. These buildings although understated in nature, make a positive contribution to the historic townscape, and 6 GMS is no exception. Indeed, the conversion and adaptation of the building has removed intrusive 20th-century interventions to reveal more of the historic fabric of the building, enhancing its historic character and ensuring the preservation of this important non-designated heritage asset as a local landmark. 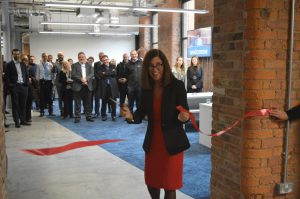 Success at the CIOB CCISY Awards 2018